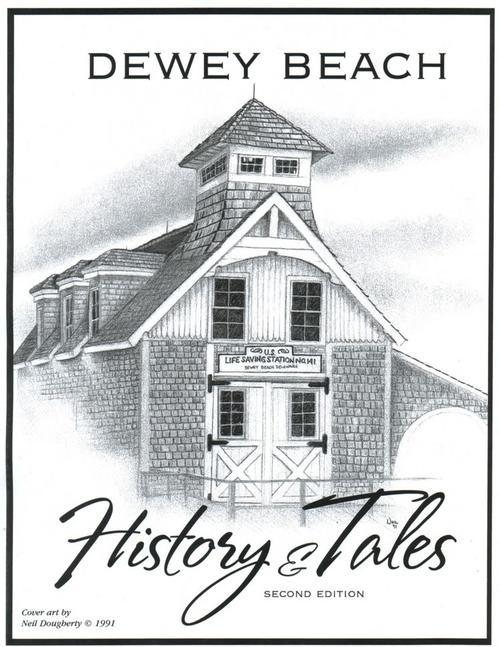 The second edition of Dewey Beach History & Tales was compiled and edited by Barbara Quillen Dougherty and published by Hal Dukes. The original book (first edition) was published in 1996.

In addition to numerous updates and historical information, there are many new “tales” about the town. One of these tales concerns a strange fish discovered by John Coady in 1940.

Bob Schnepfe, who so apply wrote the Bottle & Cork article in the first edition, has reported the full story of the Dewey Beach Rebel Reunion in the second edition. Jean Abplanalp has rewritten three very informative articles about Dewey Beach in the 1920’s, 1930’s and 1940’s.

In addition to re-writing her original articles, Barbara Quillen Dougherty has added several new chapters as well as additional Dewey Beach trivia. In this book, she remembers those whose footsteps we follow in the sands of time.

With the addition of sixteen fact-filled pages and one hundred thirty-three new photographs, there are now 144 pages and approximately 300 photographs, maps, postcards and other images.

Available for purchase at Browseabout Books, 133 Rehoboth Avenue, Rehoboth Beach. Copies can also be ordered by sending an email request to DeweyBeachHistory@comcast.net. In addition, Dewey Beach History & Tales can be found on Facebook.