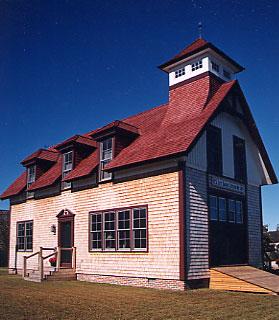 The original Rehoboth Beach Lifesaving Station was located on the beach end of Dagsworthy Street . The building and one acre of land was conveyed to the United States of America for Coast Guard purposes by a deed dated August 6, 1878 . In 1947 the building was decommissioned under the leadership of Captain Joseph Walker who moved the building to Highway One and made it his home. He and his wife raised three children there. After Capt. Walker's death his widow remained in the Station until 1971. It remained vacant until January 1998 when Bill and Joan Reader came upon it.

The interior has been painstakingly restored to as close to the original as possible. The heart pine floors are original as are the doors and trim. All the cabinetry in the kitchen were built by Bill and match the original as closely as possible, including a "pass through" glass window which he included as a cabinet door front. The staircase was added by Capt. Walker in the late 1940's when he added the second floor. While the boat doors are not the original, they appear to be though they are really an insulated wall.

When the building was moved the second floor was cut away from the first to accommodate transport. After the two parts were rejoined the staircase was replaced. On the upper level are two bedrooms and a bath. The two sinks are original to the building. The master bedroom served as the bunk house for the crew of six. The ladder used by the crew to climb up into the cupola to keep watch is now used as a headboard and bookshelf. The Readers have installed lights and automatic window opening devices to give more authenticity to the cupola by night when lights shine out as they did when the Station was in use.

This historic treasure has a sense of history and purpose. It is apparent the Readers took on this project as a labor of love.